Georg Kaser has been a dedicated supporter and stalwart worker for the International Association of Cryospheric Sciences (IACS) and its predecessors for well over a decade. He played a leading role in establishing IACS as an independent Association of IUGG, and in carefully nurturing and guiding its development in the very earliest years.

Georg was elected for a 4-year term as Secretary of the International Commission on Snow and Ice (ICSI) under President Gerry Jones in 1999. As Secretary, Georg worked not only on managing routine ICSI administration, but also, with Gerry and a team of other prominent ICSI scientists, to promote and develop the case for ICSI to become a full Association of IUGG. This culminated in a proposal for a new International Association of Cryospheric Sciences being submitted to the Council of the 2003 IUGG General Assembly in Sapporo. At IUGG 2003, Georg became President Elect of ICSI. The submission for an independent cryospheric Association was approved by the IUGG Executive Council in Boulder in September 2004 and, as an interim step, an IUGG Union Commission on Cryospheric Sciences (UCCS) was established to replace ICSI. Thus, at an Extraordinary UCCS Bureau Meeting in Quebec City in December 2004, Georg became President of UCCS rather than ICSI. And when, during the IUGG General Assembly in Perugia in 2007, the IUGG Council approved IACS as its eighth full Association, Georg became the Founding President of IACS.

During his term as President of both UCCS and IACS, Georg took the major role in establishing the strategic direction of the new Association, in promoting its activities and influence, and in publicising it within the wider cryospheric community. Even when he stepped down as President, Georg was an exceptionally active Past-President, continuing to guide and steer the new Association, and undertaking a diverse range of IACS tasks including representing IACS in the selection process for a new head of the World Glacier Monitoring Service, and in presenting on cryospheric change to Delegates to the UN Framework Convention on Climate Change COP (Conference of Parties) in Bonn. He was an active and effective member of the Scientific Program Committees of both the IUGG General Assembly 2007 (Perugia) and the IAMAS/IAPSO/IACS Joint Assembly in Montreal in 2009 (MOCA-09).

Georg is Professor for Climate and Cryospheric Research at the Institute for Meteorology and Geophysics, University of Innsbruck, and he has significantly contributed to the cryospheric community through his personal research, particularly through his work on high alpine glaciers in tropical South America, Africa, and in Asia. He has contributed as a Lead Author on cryospheric observations to both the IPCC Fourth and Fifth Assessments, and was instrumental, partly through IACS, in ensuring that the IPCC Bureau included cryospheric change as a separate section of AR5. He is committed to training the next generation of cryospheric scientists, particularly in the developing world and participated as an organiser and/or trainer in ICSI/IACS/UNESCO glacier mass balance training courses on the Chhota Shigri Glacier, India; the Zongo Glacier, Bolivia; and the Yala Glacier, Nepal. For many years he has also been involved as an organiser and lecturer in the Karthaus Summer Schools on “Glaciers and Ice Sheets in the Climate System” in Italy. For example as part of this summer school, in 1999, Georg led a field trip to the site where ‘Oetzi’ the South Tirolian ‘Ice Man’ was found, that included incumbent IACS Secretary General Andrew Mackintosh and Head of the IACS Glaciers and Ice Sheets Division, Cecilie Rolstad Denby. Good humoured encouragement of younger scientists is one of Georg’s defining characteristics. 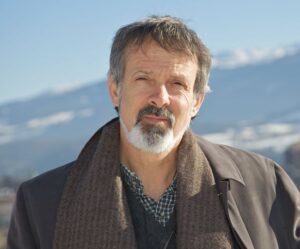