Atsumu Ohmura is an outstanding climatologist and cryospheric scientist. His scientific work emphasizes the importance of the radiation component on Earth’s climate and in particular for the cryosphere. But beside his many scientific achievements, Atsumu also committed himself to promote and support organisations dealing with cryospheric sciences such as the International Association of Cryospheric Sciences (IACS).

His profound knowledge of both international cooperation and the cryosphere was an invaluable asset in advising the former International Commission for Snow and Ice (ICSI) on its way to become today’s International Association of Cryospheric Sciences (2001-2006).

Atsumu is professor emeritus of the Institute for Atmospheric and Climate Science at ETH Zurich, where he was the leader of the Institute’s Climate Research Group. His remarkable sense for observations and meticulous data analysis led him to fundamental insights; that an increase in atmospheric particulates during the period between c. 1960 and 1990 led to ‘global dimming’, a negative feedback that reduces the rate of global warming observed on Earth in response to increasing CO2. His thorough knowledge of the cryosphere-atmosphere interactions also led him to theoretically explain numerous field observations and empirical relationships, such as the degree-day approach to estimate snow and glacier melt or trends in high-altitude and high-latitude climatology and glacier change.

Atsumu remains in retirement a very active, encouraging, and stimulating colleague to many of us. Today, his former students are continuing his scientific approach, which reflects itself nicely in the words of Prof. Dr Ayako Abe-Ouchi, one of the 47 PhD students he advised during his career, “When I discuss science with him, he often starts by saying that we should be skeptical even towards our own results. His skepticism is never meant to be negative, but rather “skeptical” in the sense of the original meaning of the word: to look carefully. This was also an important principle in his own research, which I believe, was the foundation of his successful achievements in science. His enormous contribution to the fields of glaciology and climatology has significantly shaped our present understanding of the relation between the cryosphere and climate.”

Atsumu Ohmura warrants appointment as an Honorary Member of IACS not only because he has been an early advisor and supporter of the youngest Association of the International Union of Geodesy and Geophysics, but in particular because of all he achieved in helping establish IACS and for promoting cryospheric sciences through both his own research and his work for the cryospheric community. 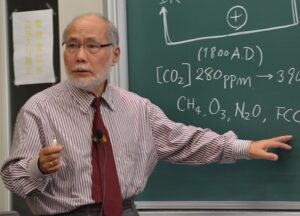